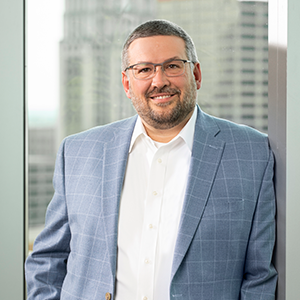 Scott Markovich oversees all CareSource health plans to support member growth, provider strategies and health plan performance. He also leads the product strategy as it relates to managing individuals with complex needs. He works closely with market and corporate leaders to align operating plans across all states where CareSource serves members and focuses on community and business partnerships including relevant regulatory agencies.

A seasoned government programs executive, Scott brings 25 years of experience in managing health plan P&L, developing provider networks, building specialty health plans and overseeing financial reporting. In his most recent role as Senior Vice President and General Manager, Medicaid for CareCentrix he was a key leader as the company grew through a Medicaid and Long-Term Services and Supports (LTSS) redesign.

Scott also spent several years at Aetna in a variety of executive roles including Regional Vice President, Midwest Region, Vice President, Medicaid Growth and Vice President, Medicare Strategy and Shared Services for Aetna. In addition, Scott worked for Magellan Healthcare, serving as President of Magellan Complete Care where he was responsible for their integrated physical and behavioral health care offerings, including complete care for special populations and for developing health plans specifically targeted to individuals with Serious Mental Illness (SMI) and Managed Long-Term Care. He and his team launched the first Medicaid Specialty Plan for individuals with SMI in the country in Florida in 2013.

Scott earned his bachelor’s degree in health policy and administration from Penn State University. Scott is active in his community serving as Vice President of the board of the Ethan Miller Song Foundation. In addition, Scott and his family are volunteers for All the King’s Horses Equine Rescue and currently, Scott is a basketball coach for Guilford High School’s varsity and junior varsity programs. He previously held board positions with the New Haven Diaper Bank and the Connecticut Association of Human Services. He also received a citation from the State of Connecticut in 2009 for his work in the Connecticut Medicaid Program.