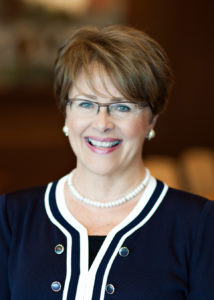 Pam Morris has more than 40 years of experience in managed health care and the public sector. As an entrepreneurial architect, she pioneered Ohio’s first mandatory Medicaid managed care program and built Dayton Area Health Plan, funded with a half-million dollar grant from the State of Ohio and 38 employees (1989), to present-day CareSource, boasting a 2017 revenue of $8.8 billion and a current workforce of 4,000.

As the Founding President & CEO of CareSource, Pam has been recognized for her leadership and commitment to improving the health and well-being of the members CareSource serves. She was named the 2007 National Entrepreneur of the Year, health care Services by Ernst & Young. Pam has also won several local awards, including the 2014 Maureen Patterson Regional Leader Award from the Dayton Development Coalition. She is a former Chair of the Hospice of Dayton and the United Way of Greater Dayton Area Board of Directors, and is a past board member for Dayton Power & Light. She also served on the America’s Health Insurance Plans (AHIP) Board of Directors.

Pam retired from CareSource in May 2018 after more than 33 years of service.